skip to main | skip to sidebar

1. Life of Pi by Yann Martel *
2. Tom's Midnight Garden by Philippa Pearce
3. The Girl Who Circumnavigated Fairyland by Catherynne Valente *
4. Small Acts of Amazing Courage by Gloria Whelan
5. Miss Peregrine's Home for Peculiar Children by Ransom Riggs *
6. Chance by Robert Parker
7. Joey Pigza Loses Control by Jack Gantos
8. The View From Saturday by E.L. Konigsburg *
9. Tinkers by Paul Harding
10. The Fault in Our Stars by John Green *
11. Rules by Cynthia Lord
12. The Extraordinary Education of Nicholas Benedict by Trenton Lee Stewart
13. Jake and Lily by Jerry Spinelli
14. The Herb and the Crown by Rosin McKinley
15. Ella the Enchanted by Gail Carson Levine *
16. An Abundance of Katherines by John Green
17. Catherine Called Birdy by Karen Cushman *
18. Contents May Have Shifted by Pam Houston *
19. The Little Lame Prince by Dinah Maria Mulock
20. Henry Higgins by Beverly Cleary *
21. A Lady Cyclist's Guide to Kashgar by Suznne Joinson
22. Prairie Evers by Ellen Airgood
23. Persuader by Lee Child *
24. Bud Not Buddy by Christopher Paul Curtis *
25. You're the One That I want by Von Ziegesar
26. Banner in the Sky by James Ramsey Ullman
27. In One Person by John Irving *
28. The Golden Name Day by Jennie Lindquist *
29. Paris in Love by Eloisa James
30. Bollywood Nights by Shobhaa De
31. A Wrinkle in Time by Madeleine L'Engle *
32. The Trumpeter of Krakow by Eric P. Kelly
33. The Cat Who Went to Heaven by Elizabeth Coatsworth
34. Evie and Cookie by Irmegarde Eberle *
35. Thimble Summer by Elizabeth Enright
36. Plain Girl by Virginia Sorensen *
37. Betsy-Tacy by Maud Hart Lovelace *
38. Roller Skates by Ruth Sawyer
39. A Dog Year by Jon Katz
40. Out of the Dust by Karen Hesse
41. Goody Hall by Natalie Babbitt
42. Lulu in Marakech by Diane Johnson
43. Killy Floor by Lee Child
44. The Cruelest Month by Louise Penny *
45. Hundred Dollar Baby by Robert B. Parker *
46. Worth Dying For by Lee Child
47. The Hostile Hospital by Lemony Snicket
48. Greyhound of a Girl by Roddy Doyle
49. The Bronze Bow by Elizabeth George Speare
50. 61 Hours by Lee Child
51. The Naked Roommate by Harlan Cohen
52. The Enemy by Lee Child
53. Without Fair by Lee Child
54. Heartburn by Nora Ephron *
55. Dead End in Norvelt by Jack Gantos *
56. An Appetite for Murder by Lucy Burdette
57. Harry Kitten and Tucker Mouse by George Seldon *
58. Aquamarine by Alice Hoffman *
59. Adopted Jane by Helen Fern Daringer
60. Memoir of the Sunday Brunch by Julia Pandl
61. Nothing Daunted by Dorothy Wickenden
62. The Order of Odd-fish by James Kennedy
63. Dogson by Gary Paulsen
64. Life As We Knew It by Susan Pfeffer *
65. The Dean and the Gone by Susan Beth Pfeffer *
66. This World We Live In by Susan Beth Pfeffer
67. The Wierd Sisters by Eleanor Brown
68. The Life and Times of the Thunderbolt Kid by Bill Bryson
69. Homesick My Own Story by Jean Fritz
70. Kaaterskill Falls by Allegra Goodman *
71. The Best of Friends by Joanna Trollope
72. A Drink Before the War by Dennis Lahane *
73. The Mouse and His Child by Russell Hoban
74. Wonder by R. J. Palacio *
75. Where'd You Go, Bernadette by Maria Semple *
76. The Latke Who Couldn't Stop Screaming by Lemony Snicket
77. The Towers of Trebizond by Rose Macaulay *
78. Explosive Eighteen by Janet Evanovich

My FAVORITE books this year are Wonder (recommendation from Oliva), Life As We Knew It (also recommended by Oliva), The Fault in our Stars (after I heard John Green speak), A View From Saturday, and The Girl Who Circumnavigated Fairyland.  I also read my first Lee Child book and then read as many of them as I could get my hands on.

I heard John Irving and John Green speak at ALA.  Ahhhhhh.

And I went to the 2012 Newbery/Caldecott Award Dinner  and heard Jack Gantos and  Chris Raschka.  Double ahhhh.

Posted by practical katie at 8:08 AM 5 comments:

Met my six freshman from the class of 2016 yesterday.  After a week of orientation, I'm a bit brain dead, but here are some random thoughts before I lose them.

1. Love having a freshman fellow at the group meeting.  I know all kinds of things, but I still am not entirely sure about the mechanics of registering, having never done it myself.  This year's fellow, Felix, was terrific. I put him on the spot over and over and he came through.

2. I'm going to say it publicly. Orientation is too long.  It was only day TWO and these students were bored and complaining "there's nothing to do".  They're homesick. They're anxious about taking college courses.  They want to START, not hang around.  IMHO.

3. They always expect that I"m going to tell them what to take at our first one on one meeting.  The number of possibilities is overwhelming.  I know in a few months I"ll be able to look back at these first conversations and go "ah, I should have seen it coming".  Right now, I'm not sure I can predict who is going to struggle this
first semester and who is going to sail through.

4. This year's surprise question?  After telling one of my students that class started at 9 (or 10 or 11), their repeated question was "at night?".  Classes that start at 10  at night????  Oh dear, I don't think college is going to live up to their exotic expectations....

5. And the most surprising observation came during a conversation about living with a roommate.  The observation/question was "how do you take a shower?" Yikes. I can't remember. Walk down the hall in a towel?  When do you take your clothes off?  I'd forgotten all the little, daily anxieties that come with starting college.

One student sobbed and sobbed with homesickness and anxiety.  Sometimes I don't feel like I'm qualified for this job.  But at least I was someone who could listen on the first full day of college. 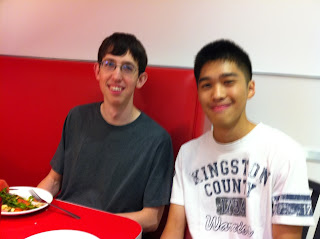 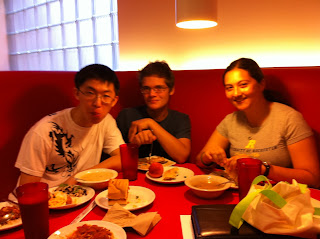 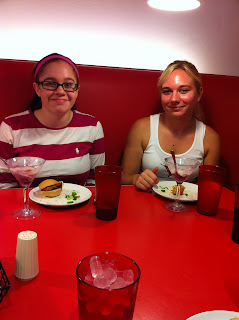 Posted by practical katie at 2:17 PM No comments:

Here's the list of the books I read in 2011 - seventy nine!  I met and surpassed my goal of reading a book a week.  Of course you will see a strong leaning towards children's literature and thus, shorter books.  I read the Harry Potter series in a big gulp.  I only read a few non fiction books, but they were some of the best I read all year -- Packing for Mars, The No Assholes Rule and Franklin and Eleanor.  I had never read Jane Eyre or A Tree Grows in Brooklyn??  Hans Brinker really isn't about Hans but is about his sister?  National Velvet is very funny and the horse wins.

I don't really know how I chose these books.  I read Lee Child because he was on a list of favorite authors of Bill Clinton.  There were advance copies I picked up at an ALA Conference.  Most of the books were sitting on my own bookshelf.  Friends gave me books.  Some (but not the majority) were from the library.  Some were books for our children's book club at work.   Have to decide what my goal is for 2012.

This is my first post for Bathroom Blogfest 2011.  It's kind of weird to admit that I've been taking pictures of bathrooms all year with this in mind... 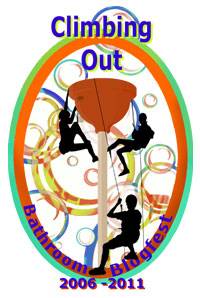 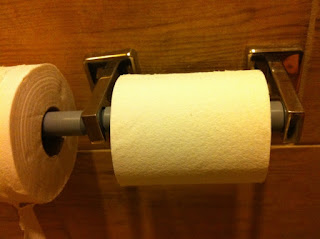 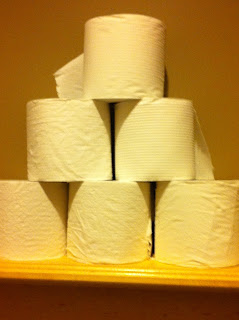 I would like to wash my hands with water. I don't want to wave my hands up and down and side to side in front of a faucet. I want water when I want water.  How many times have I had to simply GIVE UP and use the little bottle of  Purell I've learned to carry with me every where for just these situations. Sigh. 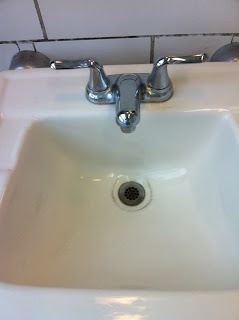 And last but not least, if and when I am successful at getting water, I want to be able to dry my hands on PAPER TOWELS.  I don't want to hot air blowing on my hands. Note I specifically didn't say  hot air *drying* my hands, because it never does.  And the automatic hand dryers have the same flaw as the automatic faucets do; I can never figure out how to wave my hands in such a way as to turn them on. 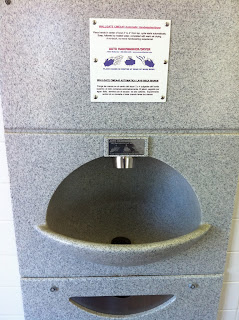 Next post will include photographs of public bathrooms that exceeded the bare essentials standard.

A Few Observations on Books

Another fall, another group of freshman.  Here are a few comments about books from the beginning of fall semester. 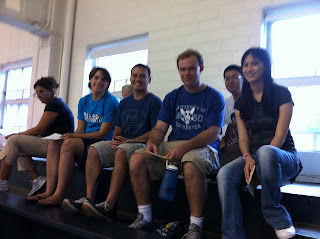 Yesterday was the first day of school for the Class of 2015.  I took a minute to jot down my impressions of my six freshman advisees and I guess advising in general.  And yes, some of them are contradictory.

1. This is the first group I've ever had who weren't afraid to email a professor or go ask questions at the Advising Fair.  What a huge advantage to already know they need help and can ask for it.

2. And yet, they are overwhelmed by the amount of new information they have to absorb.  What is "R"? Answer: Thursday in the online schedule.

3. Like all my previous classes, they are already thinking about majors (double), minors (lots) and of course, jobs when they graduate.

4.  I periodically read through the 2015 Facebook page.  Where are my classes? How do I know what textbooks to buy?  I forget that in high school, i.e. 2 months ago, all their classes were in one building.  They were given their textbooks.  They worry if they'll have enough time to eat lunch.   Oh yeah, there was a lunch period in high school.

5. They're very excited to be choose classes that let them sleep in past 9 a.m.

I love their unedited enthusiasm.   Advising definitely keeps me humble.  Every semester I learn some huge thing that I should have known.  I also have a view of the university I never had before.  I'm certainly not the best advisor there is, but I also know I'm not the worst.  As long as they'll have me, I'm going to keep doing it.
Posted by practical katie at 6:02 AM No comments:

practical katie
I'm the Associate Dean for Public Services & Collection Development at the University of Rochester.